Help the elastephantastic elephant navigate the jungle in this puzzling adventure!

If you hear a ding, that means you hit a checkpoint, so when you press R you will return back to that same spot. Press Z to undo. You can undo through a reset if you need to.

This was made for the Thinky Puzzle Game Jam.

Made with Dario Zubovic's fork (which includes my smooth camera motion implementation) of PuzzleScript.

Thanks to everyone who helped during my streams!

I played through most of this over the past 3 hours... I found it interesting but very difficult.

A few obvious bits of feedback are that more sounds would be nice, as well as an optional what-key-is-pressed feedback on the screen (the control scheme is non-trivial and I think it's hard to communicate the controls for a Lets Play without viewers seeing the keys being pressed).  It would be very helpful if the orange blocks and the water tiles had a little bit of 'gridline' to them like the grass does - I miscounted the sizes of these elements at least once.  It'd also be nice if the orange blocks and grippy logs had a 'transparency' option (like tar transparency in DRoD for example) as it's hard to keep track of the 'islands' in the water when pushing pieces atop it.

I never quite understood the trunk physics; more puzzles to tutorialize it would have helped, I think.  Even the walking mechanics are tough, I think I would have been lost right at the start if I hadn't already watched a few minutes of your YouTube dev commentary to 'discover' the game, and already seen the two-long elephant's awkward movement among the dense trees.

It's a shame that the cleverly set up 'walking paths' require so many moves, as when you do something wrong, it can take many undos... perhaps more checkpoints would help (especially if the checkpoint tiles were visually apparent and players could choose to stand on them or walk past them), or if there were a 'checkpoint stack' the user could manually use with a key, maybe (a la Fish Fillets).  I sometimes reset but I often undo'd like 100 moves in a row.

Despite these criticisms, I think all these mechanics admit some very interesting puzzles, some of which were realized here.

I did record most of my journey, and I'll post a video link when it's ready, as I think my commentary and troubles may provide useful feedback.  EDIT - Link:

Thanks for the feedback and playthrough video! It's always fun to see the moment the trunk mechanic is introduced.

Yeah, some of your problems with the game are definitely legitimate and I certainly would improve those things if I returned to it. My only excuse is that it was made for a game jam, and just implementing the trunk mechanic took up more than half of the time, haha.

First half through I thought how neatly put together the map was. Only one solution with all the returning later on. It is a feeling of witnessing a fine working machinery...

By the end I had a horrible time. last puzzle.. well it definitely has a few steps. I have no idea how to geometrically calculate it, I just ended up thinking what task seems kinda hard and trying to complete it anyway. There's no high-level logic I see that says "this is achievable if you bring both to that end and then back and then it somehow works out anyways." It was just seemed like a lot of coincidences when ground happens to be at the exact spot.
All the trunk puzzles solved themselves except for the last one, which I kinda bruteforced too. It's absolutely unintuitive.
Water have no tiles or texture and sounds got really annoying.

Sorry, I am so salty about the amount of time I wasted at the last puzzle without the satisfaction I craved... still, I feel It's a few steps from a good puzzle.

I'm always writing these comments after everyone's left the room. Oh well. Finally got around to playing (and finishing). Terrific game and a lot of fun, once you get used to the mechanics. Maybe a little hard to see where you can move, and what's off screen. Thanks for this one, and for Con-fusion.

So it's like A Monster's Expediction but there is no monster, just an elephant ? Allright then.

I suppose it's a bit like Stephen's Sausage Roll crossed with A Monster's Expedition, but a later surprise mechanic makes it very different to both.

Nice feature at half the game !

This game is amazing. Great job! :)

Finally got around to playing this - it was really fun!

Hi! I love the game but i think im a little stuck :/ I think there's a tree in the way of me being able to turn to get the next log. I tried watching the walkthrough but my game looks slightly different. Could you help? 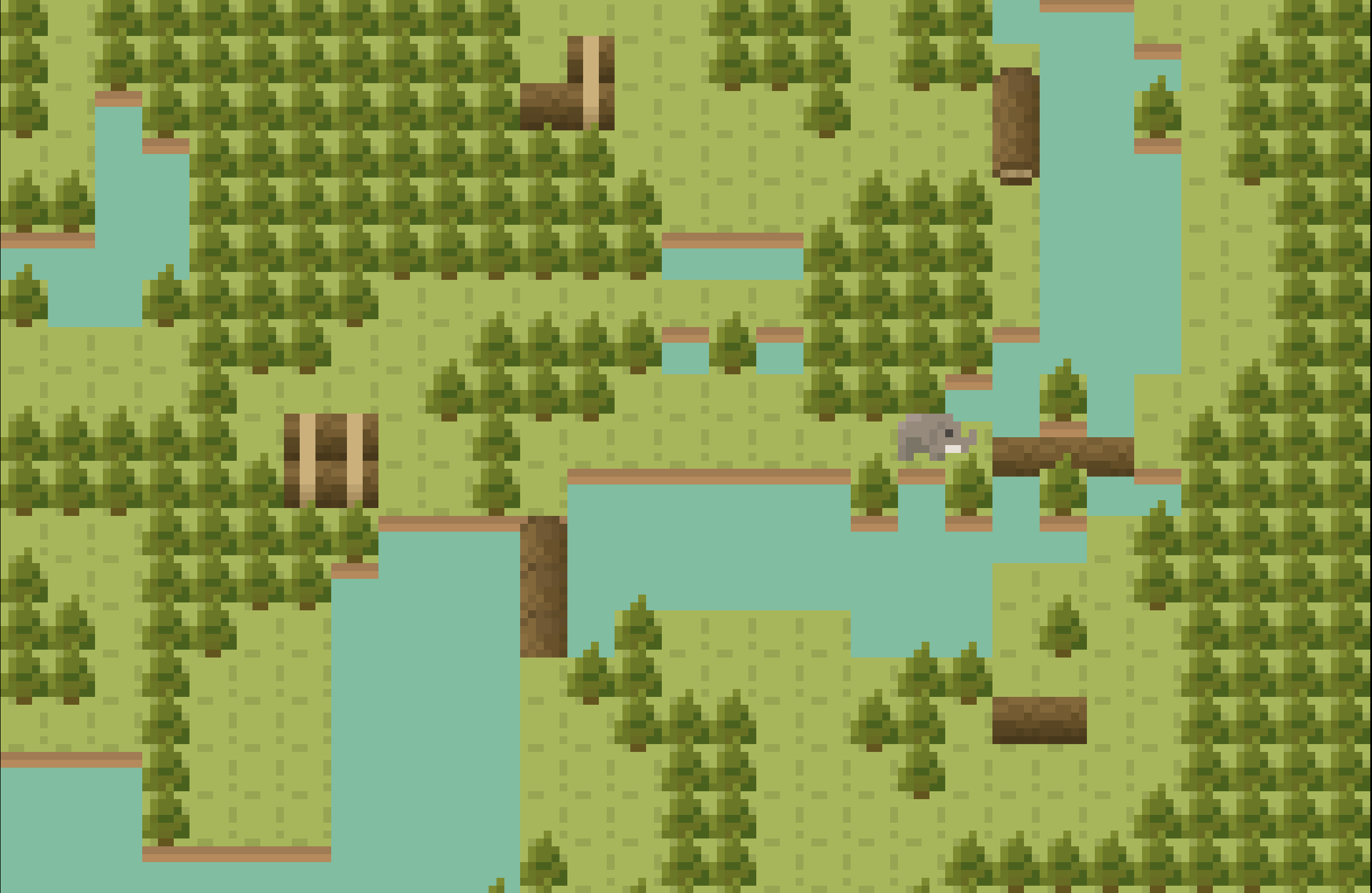 Hello! The walkthrough you've watched was on an old build of the game and used an unintended solution at this point - so you'll have to figure out a different way. I will at least say it's definitely possible to grab that log above if you turn around, but once you've grabbed it you'll have to do something different with it. In the walkthrough, you'll notice they also don't use the 4-long log at the top, but that's now a necessary part of the solution!

Thanks for this game !
The level design is very well thinked !
I used competor run twice for very hard moments, end included !

Loved this a lot! Took me about a week of on and off play but finally managed to get it! Would you mind if I posted a guide/speed run of the game?

No problem with me! Thanks for playing. Link me the guide/speed run when you're done.

Reply
Tucsters1 year ago
Hope it helps anyone struggling with the puzzles :D
Reply
rebca1 year ago(+1)

Haha, I'm glad that moment was as fun as I was hoping. Thanks for playing!

is this a reference to a german kid tv show

Nope! What reference are you thinking?

I had some fun. Thank you!

I accidentally vaporised the elephant :/ (edit: ahhh, turns out my trunk was on dry land but not my torso)

Haha yes, you drowned! Sadly I didn't have time to put an animation in for it, so it's not very clear.

Got to the end in one piece eventually :)

That was a lot of fun, especially the sudden introduction of the trunk mechanic!

​Incredibly impressive jam game. The puzzle design is just fantastic and the trunk mechanic looks like it has a lot of potential for further exploration. :)

Thank you! And yes, there was so much more I wanted to do with the trunk.

I haven't finished it yet, but this is really cool!
I'm getting major Stephen's Sausage Roll vibes because of the elephant's movement. Great stuff.

Thanks! And haha, yes, very much inspired by Stephen's Sausage Roll. The idea for the later mechanic came first and it felt like SSR-style movement would be a good fit for it, then I just found so many puzzles to do using only the SSR-style movement.

Reply
competor1 year ago(+3)
Great job! The open-world graphics looks quite nice, and each puzzle is very polished. I was very satisfied.
Reply
Joseph Mansfield1 year ago(+1)

Thank you! I really appreciated the video - it's fun to hear your reactions to my trickery!

AMAZING! The last two major puzzles (the 2x2 "raft" puzzle, and the two pink blocks) had just the right amount of difficulty, and were really satisfying to get after slowly understanding their logic. Really nice execution of a single stage broken up into multiple puzzles, with a tiny bit of backtracking to make it feel connected but not so much as to add another layer of difficulty. In general, really great design, great balance, a good playthrough time, and nice extra mechanic at the end! This was a delight to play. Thank you!!

Thank you - so kind of you! I'm very glad you enjoyed it. I was doubting the idea just a couple of days ago but I'm really happy with how it turned out. 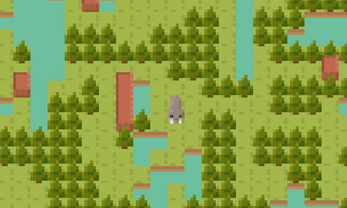